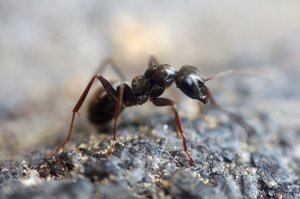 Ants are usually found in the spring and summer months outdoors on patios, lawns, gardens and in flowerbeds but they will often enter indoors in search of food. You may find just one or two possibly in the kitchen or you could be unlucky enough to have hundreds in there. But it is at this point when the ants start coming inside that they need controlling.

The most common species of ant that will invade your home is the Garden ant, or Black Ant. Black ants are not dirty insects and do not carry disease, but they ARE a problem once inside your home, and they do need treatment as the sheer number of them can be astounding. Along with woodworm and bed bugs, we do not recommend you attempting to treat ants with amateur products, dusting the areas with ant powder rarely works, it usually just kills the 5-10% of ants that are out and about on the surface but does not destroy the ants nest, which is imperative. Yu will be better off getting a pest control professional in.

Another species of ant that may invade your home, and which has a very painful sting is the red ant, or Fire Ant.

As the season progresses, the number of ants in a nest can multiply from hundreds to several thousand, so it is imperative to control ants as early as possible when numbers are at the lowest and before they mature into flying ants.

As well as Black ants and Red ants, there are other ant species too. Argentine ants, Ghost ants, and Pharaoh's ants, which have a tendency to infest hospitals, and are now being seen more and more in high rise flats.

These ants need to be identified correctly prior to treatment.

Failure to identify which kind of ant you have and not treat it correctly can lead to species such as Pharoah's ants splitting off and making several smaller colonies, which in turn will create an even bigger problem.

If you are in the Middlesbrough, Redcar, Whitby area then Exopest Ltd will strive to be at your property the same day of you calling. We give a professional service at the best price in the area.

"Exopest Ltd follow the CRRU code of conduct, are members of the NPTA, RSPH and are on the Prompt Register for pest control excellence, which means your visiting technician will be both highly qualified and committed to keeping their skills and knowledge up to date"